Google core algorithm update. Four words that have the power to send a shiver down the spine of even the most experienced SEO professional and shockwaves through the world of digital marketing.

And with Google rolling out updates and improvements hundreds of times each year, it can be difficult to keep abreast of the changes.

We’ve pulled together a handy timeline to bring you up-to-speed on some of the biggest Google algorithm changes since 2011. 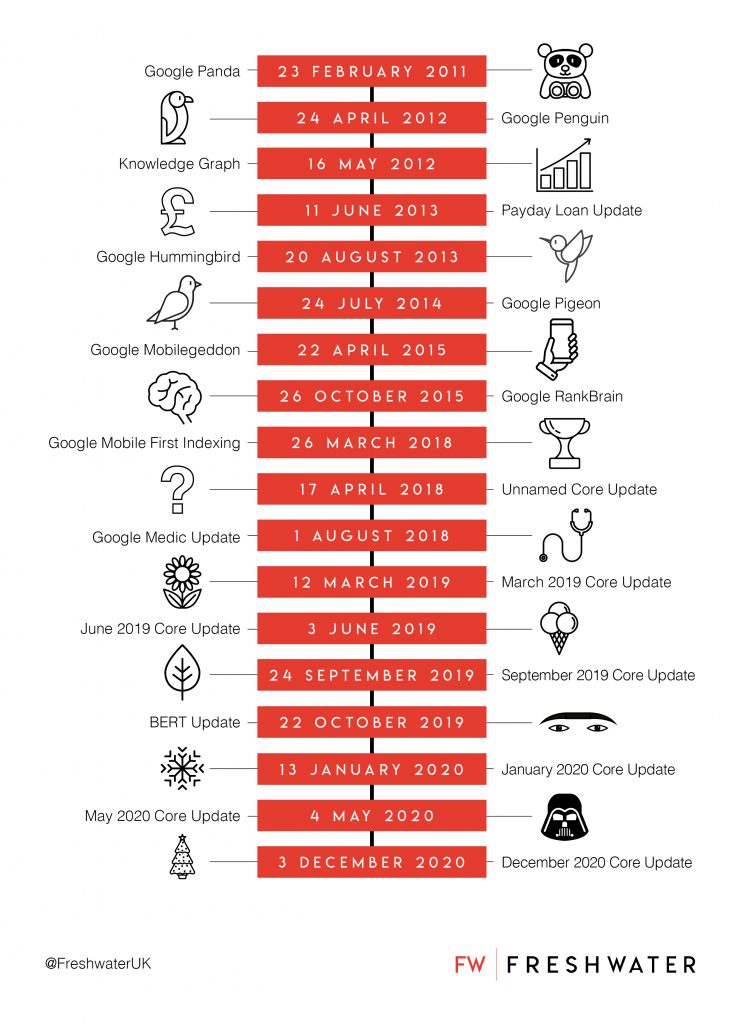 Google’s Panda update, also known as the Farmer update, began to roll out in February 2011 and continued for a number of months.

Panda was a major algorithm change which left many in the digital marketing world feeling…bamboo-zled (see what we did there?).

The update cracked down on content farms, thin content and websites that hosted a large volume of ads in comparison to the content on-site. This update affected up to 12% of all search results at the time.

Further rounds of changes to the Panda algorithm have continued to roll out since its initial launch, and we’re currently on Panda 4.2.

The Google Penguin update, which was initially dubbed the ‘Webspam Update’ was unleashed in April 2012.

Penguin was another major update which caused waves in the SEO community; it targeted spam SEO tactics such as keyword stuffing and link schemes and is thought to have impacted 3.1% of English queries at the time.

As with the Google Panda update, Penguin has continued to be rolled out since and we’re now on Penguin 4.0.

Google began the introduction of the knowledge graph way back in 2012 to enhance the Google search experience for users, and to focus on semantic search. Google broke its aims down into three main areas of reasoning, remarking that Knowledge Graph would help users:

1. Find the right thing
2. Get the best summary; and
3. Go deeper and broader.

Knowledge Graph was expanded in December 2012 and again in 2013.

This algorithm update was targeted at specific niches which were renowned for generating spam, such as the payday loan industry. The algorithm completed roll out within around two months.

Named for being fast and precise, Google Hummingbird was the first complete overhaul of the Google algorithm since the Caffeine upgrade in 2010.

In the summer of 2014, Pigeon swooped in to shake up local SEO results. The Google Pigeon update claimed to create closer ties between the core algorithms and the local algorithm, and dramatically changed how location cues were processed.

Google’s Mobile Update, more commonly referred to as ‘Mobilegeddon’, was a rare pre-announced update which dictated that, for the first time, mobile rankings would be different for mobile-friendly sites. Although initially marked as a huge industry-changing update, the impact of Mobilegeddon was much smaller than anticipated.

While RankBrain was announced in October 2015, it’s thought that the actual launch of the update was much earlier in the year as Google indicated that machine learning had been part of the algorithm for some months.

Machine learning is what sets RankBrain apart from other updates. According to Moz: “To “teach” the RankBrain algorithm to produce useful search results, Google first “feeds” it data from a variety of sources. The algorithm then takes it from there, calculating and teaching itself over time to match a variety of signals to a variety of results and to order search engine rankings based on these calculations.”

Mobile-first indexing had been in testing for many months before Google announced in March 2018 that the update was being rolled out with sites being gradually migrated. Following the announcement, notifications began to appear in Google Search Console to update webmasters on the status of their website/s.

While this Google update didn’t have an exciting name, it did cause big fluctuations in the search engine results pages (SERPs) for more than a week, and was confirmed as a broad core update by Google themselves.

Google’s Medic Update was a broad core algorithm update which heavily impacted Your Money or Your Life (YMYL) websites – websites which talk about health, wellness and financial stability.

Although YMYL websites saw the biggest impact, the change was felt by all verticals.

Although no specifics were given about the March 2019 update, Google did confirm that it was a broad core algorithm update – declaring it the third major update since the labelling was introduced.

The June 2019 Google update was pre-announced, but Google gave limited details as to the nature of the update. Impact was felt by sites which had been affected in previous updates, though the impact was thought to be smaller than the YMYL / Medic update from the previous year.

It was noted that UK publishers experienced serious losses following the June 2019 update.

Not much information was provided by Google on the September 2019 Core Update, but it seemed to have an impact on websites that were affected by previous core updates.

The International BERT Roll-out was completed on 9 December 2019 in 70 languages.

The dawn of a new century saw another core update from Google.

The January 2020 Core Update was similar to the previous three core updates rolled out but was smaller and less impactful than the August 2018 ‘Medic’ update.

After months of turbulence, on account of the COVID-19 pandemic, digital marketers had to contend with another core algorithm update; the May 2020 update measured was the second largest since the 2018 ‘Medic’ Update and caused heavy ranking changes.

Is your website suffering following a Google algorithm update? Head over to our search engine optimisation page to find out how we can help you.

The NHS is sounding the alarm – will anyone listen?